Can home owners or builders build a structure with lumber produced from trees grown in Canada that they have personally milled or purchased that is not grade stamped?

No, the lumber must be grade stamped in accordance with the National Building Code of Canada which requires adherence to “CSA-O141 Softwood Lumber” where it states:

However, homeowners or builders that want to build a structure with lumber that they have personally milled or purchased that is not grade stamped can contact and make arrangements with a CLSAB Accredited Agency (https://www.clsab.ca/clsab-accredited-agencies/) for the Agency to grade and stamp every piece of lumber to be used in the structure that satisfies the required NLGA grade.

What procedures are to be followed when Canadian lumber is used in a structure required to have a building permit and it has not been grade stamped?Janet Hubley2021-04-29T17:20:27-04:00

What procedures are to be followed when Canadian lumber is used in a structure required to have a building permit and it has not been grade stamped?

In Canada, every piece of structural lumber has a CLSAB approved grade stamp placed approximately 18 inches (45 cm) from one end.  The homeowner or builder will need to contact and make arrangements with a CLSAB Accredited Agency (https://www.clsab.ca/clsab-accredited-agencies/) for the Agency to grade the lumber according to the NLGA grade rule that satisfies the building code requirements.  The Agency will provide a written opinion on every piece of lumber in the structure.  The CLSAB Accredited Agency is restricted to providing a written opinion as grading requires all 6 edges of each piece of lumber to be examined, this is not possible for the lumber in a structure.

Can individuals employed by a lumber mill and certified as a mill grader inspect and certify/stamp lumber for homeowners or builders?Janet Hubley2021-04-29T17:20:27-04:00

Can individuals employed by a lumber mill and certified as a mill grader inspect and certify/stamp lumber for homeowners or builders?

No, certified mill graders can’t certify and/or stamp lumber for homeowners or builders.  Mill graders are restricted to grading at the mill they were certified for by the CLSAB Accredited Agency.

Can homeowners and builders use lumber imported into Canada to build residential structures?Janet Hubley2021-04-29T17:20:27-04:00

Can homeowners and builders use lumber imported into Canada to build residential structures?

Yes, if the lumber is D.Fir-L or Hem-Fir grown in the United States and stamped with an American Lumber Standards Committee Accredited Agency grade stamp (http://alsc.org/uploaded/LumberProgram_facsimile%20January%202021.pdf) as CSA-O86 provides this equivalency.  For all other imported lumber, the homeowner or builder must consult with a structural engineer to determine design values for the lumber and then each piece must be inspected by a CLSAB Accredited Agency (https://www.clsab.ca/clsab-accredited-agencies/) to ensure the material meets the required NLGA grade.

Do timbers, which have a thickness of 5 inches and greater and used in a structure requiring a building permit, require a grade stamp?

Yes, however, as timbers are generally exposed in a building, they can be end stamped, or a “certificate of inspection” may be issued by a facility registered with a CLSAB Accredited Agency.  The certificate should include:

How were the design values established for structural lumber?

Prior to the 1970s, the design values of Canadian dimension lumber were determined by testing small clear samples.

Beginning in the 1970s, new data was gathered on full-size graded lumber, known as in-grade testing.  The in-grade testing program involved testing thousands of pieces of dimension lumber grades to destruction in order to determine their in-service characteristics.  Resulting in the establishment of new relationships between species, sizes, and grades.

In the early 1980s, the Canadian lumber industry combined the in-grade testing with a major research program for bending, tension, and compression parallel to grain strength properties of 2-inch thick nominal (38 mm) dimension lumber for Select Structural, No.1, No.2, No.3 of the commercially important Canadian species groups; Spruce-Pine-Fir (S-P-F), Douglas Fir-Larch (D.Fir-L) and Hem-Fir.  This provided the basis for extending the results to the full range of dimension lumber grades and member sizes described in CSA-O86 Engineering Design in Wood.

How are the design values for structural lumber monitored?

The National Lumber Grades Authority (NLGA) monitors structural lumber design values for the three major commercial Canadian species groupings, Spruce-Pine-Fir (S-P-F), Douglas Fir-Larch (D.Fir-L), and Hem-Fir.  Monitoring involves the collection of samples from across Canada and testing them to ensure there has not been a statistically significant change in the design values assigned to the species and grade.

What is the difference between Machine Stress Rated (MSR) lumber and visually graded lumber?

Based upon in-grade testing the anticipated strength properties for visually graded lumber are determined by visually assessing each piece for the presence of strength reducing characteristics such as knots, slope of grain, etc.  The strength characteristics of MSR lumber are determined by testing each piece to measure the stiffness.  MSR lumber is also visually checked for properties other than stiffness which might affect the piece.  Given that the stiffness of each piece is measured individually, MSR lumber can be assigned higher specified design strengths than visually graded dimension lumber.  This information will appear on the MSR grade stamp with an Fb and E value.  Fb indicates the fibre stress in bending applicable to lumber loaded on edge in pounds per square inch.  The Fb values can range from 1200 Fb to 3000 Fb.  E is the mean or average modulus of elasticity (MOE) for the grade in millions of pounds per square inch.  The E values can range 1.2 E to 2.4 E.

What does HRA mean on a fingerjoined stamp?

HRA stands for Heat Resistant Adhesive and indicates that the adhesive used in the manufacture of fingerjoined lumber satisfied the ASTM D7374 wall assembly fire test.

What is the difference between a grade mark and a certification mark?

The grade mark is required to demonstrate compliance with the National Building Code of Canada whereas a certification mark is to identify conformance with a market access program.

What is the difference between boards, lumber and timber? 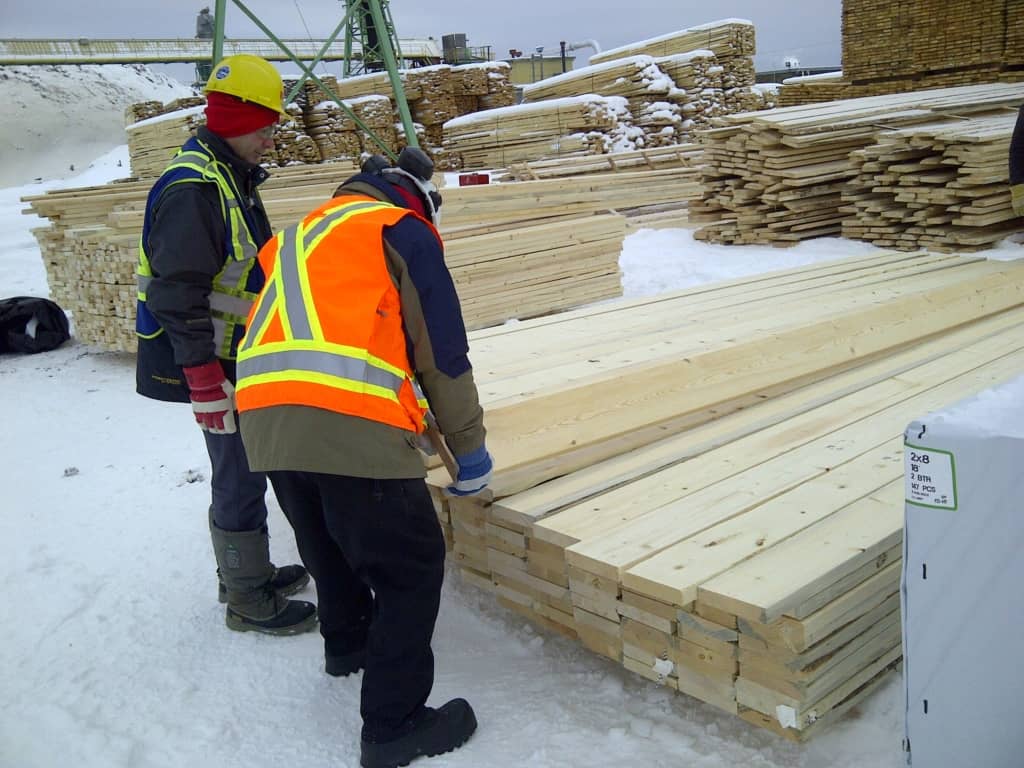 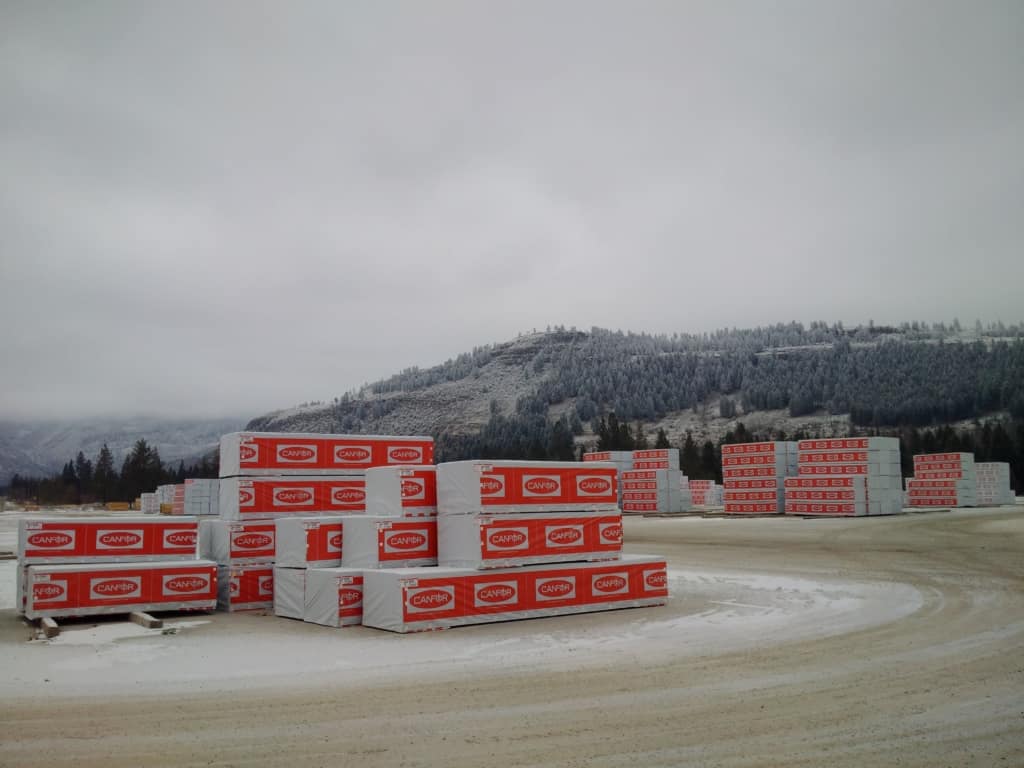